Dreamcatcher 4 was a failure. Fortunately, @MWAVE_JON had pity on us and took over on the redesign, which is Dreamcatcher 5. The board is 40mm x 40mm and is intended for use with a dCSS LNB, which will be provided in the kit. For Lantern, the dCSS LNB and Dreamcatcher will be integrated into a single enclosure. We’ve already confirmed reception with a dCSS LNB, which allows removal of the mixer and LO that was on Dreamcatcher 4. The new board is much simpler, since it’s just an ESP32-S2-MINI and Semtech SX1280. There is nothing in between the RF connector and the SX1280.

Another change is that USB-C (over a USB 2.0 interface) will be used instead of a microUSB connector.

Prototypes are being ordered today. 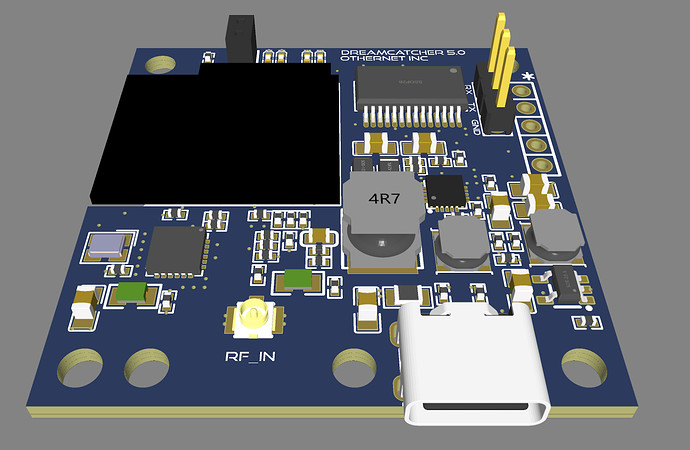 For those who don’t know what a DCSS Lnb is.

The lnb downconverts the full ku 10700 to 12700 spectrum on both polarities to 2 separate Lband stacks. The stacks are then digitised with a Pair of 5.4G ADCs. The output has a single 10G DAC to reconstruct RF.
The output of the lnb can have 24 or more, depending on the chipset, fixed channels (but programmable) and each fixed output called User Bands can access any frequency on the input. A command is sent to the lnb that places any frequency on the input of the lnb to a fixed lband output.

We have pimped the firmware in the LNB to push it as far as possible so one lnb can cover the older boards but some processing is still needed as the lnb requires a data feed to control it. In addition it doesn’t (YET) have the stability of the bullseye so some of the frequency offsets will need to either manually offset or tuned out via FW.

We managed to lock to Eutlesat 8W in UK with the dcss and dreamcatcher 3.03 so the new 5.0 should be no problems and will reduce the system NF too as its direct into the SX1280 from the LNB. In addition the dcss is very clean and only pushes out a single 20M wide digitally filtered transponder.

Dcss does require a fair but if power and hence the number of power conversion stages in the design.

Future?.. We are working hard to get the system lower cost and more robust and going forward the DC5 will be a great test bench for the next generation DC6, that’s currently in early design/simulation phase, where we are aiming to fully encapsulate the circuitry into a new robust flat panel with the intention of moving quickly to closing the link for a 2 way terminal.

Just curious - - is the form fit of the DCSS LNB compatible with a standard Ku LNB holder that now holds my Bullseye which I use for the Dreamcatcher and my FTA channels? Ken

Thank you for your hard work!

For those of us who are not engineers, would you please define the acronyms ADC, DAC, FW?

Question: Why the change to USB-C?

Also, please clarify “Dcss does require a fair but if power and hence the number of power conversion stages in the design.”

Is this the LNB? https://www.zinwell.com.tw/us/satellite-terrestrial/dcss1/dcss-lnb1

Much appreciated, thank you!
Jerry

Lnb is a standard 40mm clamp. It’s a commercial product that we sell in millions.
If you clamp around the feed neck it will fit.

Adc is Analog to digital converter
DAC is digital to Analog converter
FW is firmware, basically the code in the lnb

Historically lnbs have been pure Analog and then with the Phased lock loops and progression or integration of components the lnb core shrank to a Low noise amplifiers and one chip fir the processing, some Analog and some digital but specific function and no software or processor.

The new breed was developed in early 2000 and was again a hybrid digital and Analog Chipset in the High end sat TV systems from Direct TV and Echo etc. In 2010 there was a huge leap when the true digital receivers started to emerge and many of the large chip companies started to invest massively in the digital RF so to say. It took around 5 yrs and many of the early contenders dropped out and tech was expensive and never made it to mass production.
The demand in multi tuner applications for TV gained so much momentum that the operators invested and the architectures were developed and soon standards released which lead to the development of the chipsets that are in most of the homes today. Unfortunately these never get published and are restricted. However in some cases such as in Othernet we find a common ground where there is a real possibility of growing a new generation of products on a really solid idea.

Early days but the future is bright

No not that lnb but similar. We have also.modified the unit to suit Syed application.

USB C can supply more power and also is becoming the industry standard .

Another change is that USB-C (over a USB 2.0 interface) will be used instead of a micro USB connector.

I think this is a very positive step because they are more durable. People, don’t burn your britches over this decision- - the whole wold is going there. Wait until Amazon’s Firestick does it!! Ken

I’m losing money at moment supporting this but I’m convinced with some effort this will be a game changer. Hence the effort.

If you really understand system and link budgets etc. You’ll see the real genius in this.

I think this is similar to the answer we received when we asked, “why micro USB instead of coaxial (round) power plugs”. Coaxial power connectors still will carry more current than either USB micro or USB-C, remain the industry standard (in the last year, I have purchased at least six NEW items that use them). Not fighting progress here, but if all we are doing with the connector is supplying power, it seems a little silly to step backwards to connectors and cabling that aren’t capable of carrying the load, remembering all the charging cable problems we have encountered. Is using USB-C a guarantee that we will no longer have the problem of cables from the connector that won’t carry enough power to operate the equipment? 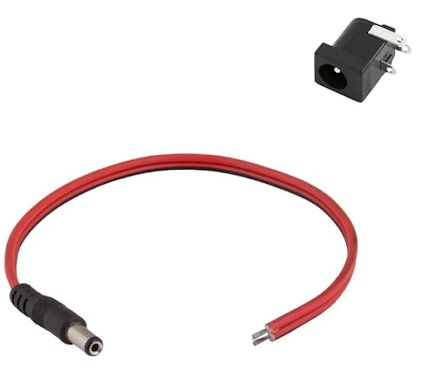 You are correct about the simplicity and power handling capabilities of standard RG6 cable. But the downside to that option is that there is no wired, data interface to the board. Although only a small minority of users will have any interest in modifying the firmware running on the Dreamcatcher, offering USB greatly simplifies flashing. It (USB) also allows the Dreamcatcher to become a USB peripheral to a PC.

But you are correct that USB-C is error-prone if not implemented correctly. We experienced that first-hand with KerberosSDR.

I don’t understand “system and link budgets”, but I am definitely watching this space to see where this goes!!

Will this new board be less costly after fully developed and ready to purchase? Current draw? What is 4R7 on the board?
Go Dreamcatcher 5 !

The retail price of the Dreamcatcher 5 and dCSS LNB will be around $50.

Is there going to be a micro SD card slot on the board for extra storage?

Yes, it’s on the bottom of the board. 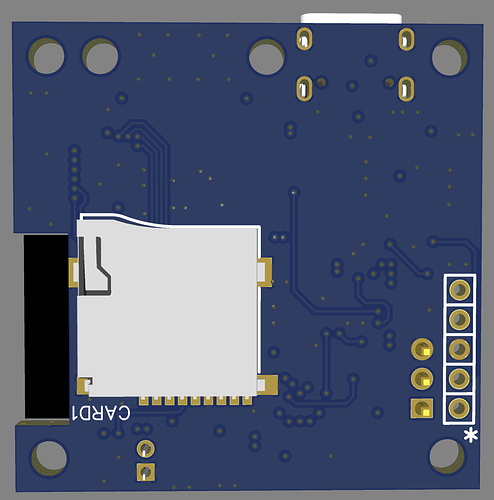 @Syed I really like the new design! Can you tell us the dimensions of the single enclosure (LNB + Dreamcatcher)? Will the enclosure be waterproof? And will it only need a single USB-C cable to provide power (without the need for any additional cable/connection)?

@Martin Regardless of what the enclosure looks like, it will be waterproof. I can’t say what the dimensions are, because the enclosure does not yet exist! Yes, there will be only a single USB-C cable entering the enclosure. The PCB will connect directly to the LNB (soldered to the board and with male right-angle F-connector).

While the boards get built, I’m sketching some ideas a dual-purpose PCB enclosure/LNB holder, which allow for elevation and skew adjustment.

Just thinking about the weather part will the board in it’s housing be able to deal with the cold ? Like below zero temps or like in the more worse areas like the Alaska winters?

4R7 is a Power choke but is actually 100uH as it forms a master impedance for Diseqc comms to the new DCSS.
Power consumption will be more than the older units as the DCSS has a beast of a SOC inside and isnt a simple universal, that said its stuffed with DC_DC converters and has active power management features. At the moment we are still discussing the setup of the LNB and the power management/comms to the LNB. We have added a 5V to 3.2V DC-DC (Pushing the Vmin of the IC’s to save power) plus enabled the SX DC-DC to reduce the power. LNB’s are being shipped to me in the UK for primary configuration and then Ill post them to Syed, once we are happy we can flash the product in China. The Boost for the LNB still exists and does not require the voltage to be changed for the DCSS, Bullseye still needs the 13/17 to switch polarity.
In addition we are talking about trying to find an enclosure we already use in China, this will be diecast but we could look at using a plastic lid to allow the WIfi to get out. If we go down this route the enclosure and components will be the same spec as the LNB, -40C to 60C Ambient. Obviously we will need to alter the layout and hopefully remove the MCU.

There is still a fair bit of work to do, especially on the firmware side encoding the Diseqc standards, for the short term we have included a secondary MCU which we already have the Diseqc protocol stacks in and thus the ESP can talk to the LNB with simple serial commands. Once this is within the ESP it can be further simplified! 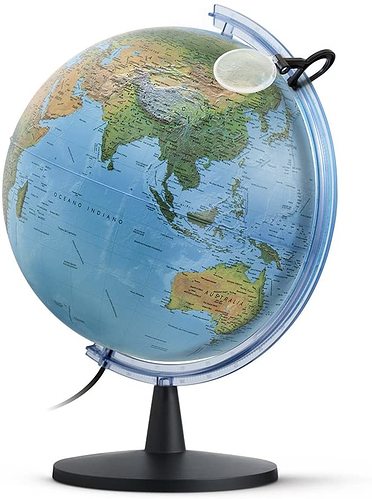 61GToguZzwL.AC_SL1000614×824 66 KB
one of these globe will be my next dreamcatcher encloser, put it near the window with all the electronic stuff disguised,probabily there is place for a short cone in front the lnb
next page →