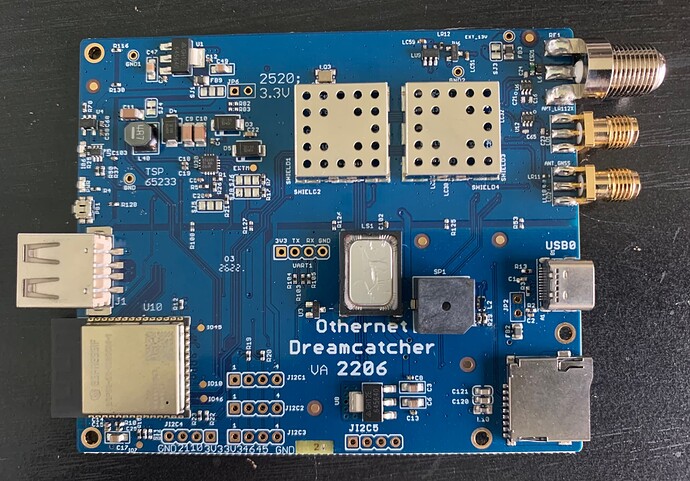 This is a fully-functional preproduction Dreamcatcher. As hard as I tried to reduce to get the price of the device down, it looks like we are stuck at $99 for a Dreamcatcher kit, which includes an LNB. This is a much simpler design than the 3.05, but back then components were much cheaper. So much for driving costs down to allow greater adoption.

As an FYI, the LNB will be a Bullseye for the time-being, but that may not always be the case.

The version that will be sold will not have the speaker which is located just above the Othernet text. The two SMA will also be removed, as this is a receive-only device. In the future, there may be a version with a Tx-SMA, but that will only be available licensed amateur radio operators.

The major active components include:

Although the speaker will be not be populated, the buzzer will remain. That will be used to alert the user for incoming packets/proper pointing. I would still like to experiment with audio, but the various I2C headers can allow for that. The I2C pins can also be used with a display panel, in case anyone wants to experiment with broadcasting images/gifs.

Will we be doing away with the SD card. and flashing the OS directly to the ESP32 and using the USB-A connector for storage. Looking at the picture it looks like their is a SD card slot in the lower right corner.

Yes, the firmware is now stored on the internal flash of the ESP32. Long-term storage is on the SD card. We plan to get USB-A working eventually, so that will be another option for storage.

I see the USB-A, pardon the question if it is ignorant, but won’t it be occupied with the wifi dongle, or has this been handled in a different way by the 32S3?

Thanks for the info.

Can you tell me what size SD card this unit will support and capacity.

ESP32 has WiFi and Blueteeth. They are very versatile MCu’s. I use one in an astronomy device I built to remote control my scope. They’ll also be popping up in an APRS project soon too.

In Case of the ESP32-S3 that is right, but beware, not all ESP32 are alike, especially when it comes to toolkit support. e.g. the ESP32-S2 only has one Xtensa core instead of 2 and no Bluetooth, and the ESP32-C3 is a completely different beast with a RISC CPU.

Espressif offers integrated, reliable and energy-efficient wireless SoCs, including ESP8266, ESP32 and ESP32-S series. The SoCs, integrating Wi-Fi, Bluetooth and AI functions, can can bring to life a wide variety of application scenarios.

@Syed
@Mark_Phillips
Thank you, Mark and Mike. My question was not about the capabilities of the ESP32S2, but rather whether the new Dreamcatcher will need a wifi dongle as in the previous versions, or if the wifi connection is handled in this specific case by the 32S2 itself. I am also interested in whether the SD receptacle will remain on the board in the production model, and if it will function just as a storage device, as I believe can be assumed from @Syed’s previous post.

@maxboysdad Wifi is handled directly by the ESP32S3-WROOM module. If you look on the left-side of the module, you’ll see a trace, which is the integrated 2.4 GHz antenna. Yes, the SD will function as normal storage when it is present. When there is no external storage, files will be stored on the tiny internal flash of the ESP32.

Yes, the microSD card holder will remain in the design. @hobergenix The microSD card should not be larger than 32 GB, though we might be able to support larger sizes in the future.

@Syed
I am interesting to know more about the version with the Tx-SMA. Will there be a possibility to use othernet to talk with other hams just like QO-100 satellite?

This is great! When ready I am excited to place my order!!!

Thank you for your work on this!

Great news! Thank you @Syed! I am also interested in the possibilities of the Tx-SMA.

@Sanjaya_Dulanka In theory, yes. I don’t have any firsthand information on QO-100, as I can’t see it. I think the band plan only allows for much more than narrowband channels, so you might be stuck using CW. The LR1120 has a minimum bandwidth of 4.8 kHz with GFSK and I think 7.2 kHz with LoRa PHY. If there is a wider channel allocation somewhere on QO-100, then you should be fine to use all three modulations. The one really interesting feature of the Dreamcatcher (for hams) is that 13/18V bias-tee. That lets you power a power amplifier.

What level of the Ham licenses will you need to transmit?

I’m ready to order one. Will there be satellite coverage in North America? Any plans for Central and South America?

Since I missed out on the last board, I’ve been working on LoRa-APRS on 433.775 MHz. Hopefully I will be able to receive APRS messages from the GEO satellite soon. 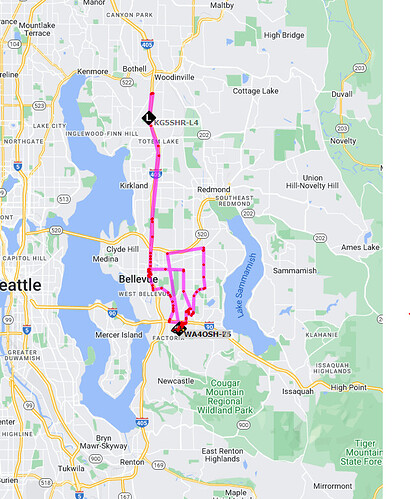 What’s the Dreamcatcher’s receive band? Does it receive Ku-band satellites? X-Band? What’s the IF for this Dreamcatcher? Does the mixer also up-band?

@Konrad_Roeder We are only planning on North American and European coverage for now. We need a distributor/reseller for coverage in South America.

The downlink over GEO is Ku; roughly 12 GHz.
We uplink at around 14 GHz, but that’s a commercially-licensed band. Othernet users can not directly uplink on our channel.

Syed and @duane909 Thanks! Nice coverage across the VHF and UHF bands available to HAMs! It’s been difficult to get LoRa support for operating in a small sliver of the 222-225 and 1240-1300 MHz bands here in the US.

Hopefully there’s support for compiling code using something like Visual Code + Platformio so that other APRS capable projects running on ESP32 processors can be compiled and run on this platform Eg. TinyGS and LoRa-APRS. This means that dreamcatcher could also be used to communicate with LEO LoRa satellites (there’s a whole list of them) and for terrestrial experiments such as LoRa-APRS, mountain topping (SOTA) and rain scatter.

…So the basic footprint has not grown …yet.

Thanks for the update.
–Konrad, WA4OSH