Yes. The link to the store should still be valid.

Received mine in good order… and BONUS, the screen works! WIll be later in the week until Ii can test operation. 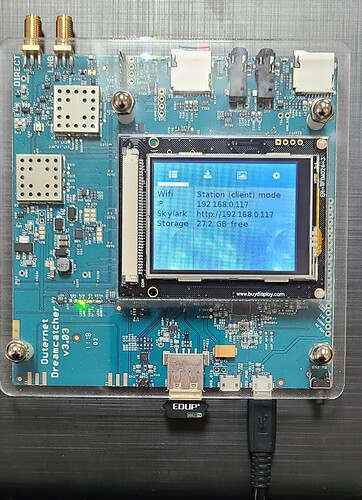 Hi Syed, I’m from Sri Lanka. Will you be able to ship to Sri Lanka? There are few rural schools that doesn’t have internet in Sri Lanka and we are hoping to try out Othernet to see the possibility of sharing educational content. Before that I would love to give it a try.

Yes, shipping to Sri Lanka is not a problem, but we do not currently have satellite coverage that reaches Sri Lanka. How many schools do you need to cover?

Thanks for the reply. Oh is it so? Will there be any future plans to cover south Asia region? For the moment there are 2 schools and one child development center we came across.

I would really like to cover South Asia, but there must first be a sponsor to cover the satellite costs. The Othernet broadcast service really only makes sense if there are hundreds or thousands of locations which do not have access to normal internet access. For two or three locations, I don’t believe Othernet is a great fit.

However, for a national service to delivery digital course material–now that’s a perfect use case.

Frankly i don’t get why cost of satellite connectivity in the industry is still that high. Yes, the birds cost millions to build, launch and operate but at least in Europe satellites are far from ‘fully booked’. the #1 boradcast spot for Germany, France and Spain has 22 unused KU transponders (out of 120). ONE of those would be enough to broadcast several HQ radio stations and a LOT of data. In this case the Spot Beam would cover developed areas, but there’s equal amounts of free capacity on beams that have a wide coverage over parts of africa, asia, oceania and south america. Many comm satellites have S- and X-Band payloads with global beams as well.

And then there’s older satellites that still work, but don’t have enough fuel to maintain a stable position. Those ‘oscillate’ in elevation but stay in their assigned orbital slot. LORA signals don’t require satellite dishes and don’t need to be pointed exactly to the satellite, so when receiving with the LNB only or a phase grid array, a divergence of +/- 5° elevation is not noticeable. Nowadays these satellites are used for temporary feeds (SNG) or just to ‘reserve’ an orbital slot so the rights to use it don’t expire.

Are you all out now or have you got any left?

Hi, I would also love to buy one

Sure thing: Here is the link.

They are sold out, does this mean all the old ones or gone?

My mistake. I had recorded an inaccurate count. It’s been updated and should now show as available.

Any news on availability for the new device?

We are waiting on the prototype of the final version. And one particular chip has a 16 week lead time.

I could make an interim device that has slightly worse performance. I’m kind of leaning towards that.

In what way would performance be degraded?

The SNR is worse by 3, when compared to the Dreamcatcher 3.05 and the latest Dreamcatcher version, which we can’t produce due to a lack of components in the market.

If any old boards left would it be possible to send to uk if I pay costs.