Still can't quite get off the ground

Hi all. Firstly thanks for this interesting service (Othernet) and this forum and the people who are always helpful.

I bought two v3.05 Dreamcatchers at the beginning of the year and have tried 4 times to set one up. I think my initial problem was location. I have some trees around and am in a slight valley. However, after changing locations to the front of my house, sighting along the LNB, I now don’t see any trees in the way.

I have kept the dreamcatcher and LNB inside the house when not experimenting, so I don’t think heat/rain/ice has ever affected it. I tried again today, since the weather was nice (under 75F, about 23C?, no rain, not much cloud cover).

I have a heavy wooden stake I drove into the ground a few feet (less than a meter) where it will not wiggle or wobble, even under strong winds (or with me pushing it). I bought an LNB mount and screwed it to a second wooden block. The screw on the LNB mount can be loosened to achieve right-left rotation (azimuth) and I attached the block to the stake with a hinge pin so I could adjust it up and down for elevation.

I set the LNB up yesterday and attempted to receive Othernet. I used dishpointer.com and since I am in the Northeast USA I selected SES2 87W.

Dishpointer gives a true and magnetic Azimith, which are off by about 15 degrees. I have the iPhone compass “Use True North” switched OFF, so I used the magnetic azimuth at first and pointed the LNB with my iphone compass. I noticed the iphone compass (like any compass) would give erroneous readings near metal objects so I tried to move away from anything that could cause this effect (including taking my Leatherman tool off my belt, which seems to have affected it, I guess I was holding the phone at waist height). While testing, I actually swept from the True to the Magnetic direction, so even if I picked incorrectly, it should have worked anyway

Dishpointer also gives a clockwise Skew number, and I believe Kenbarbi’s excellent document says you set that by standing behind the LNB and rotating it clockwise (like tightening a bolt). The LNB mount I bought has markings on it that helped me get this precisely set, but ultimately it requires a level ground mount. I think I have this set correctly.

Connecting to the Dreamcatcher over Wifi on my laptop, it was reading something like -17dB S:NR and -90 RSSI. Lock was = NO. However, it was receiving packets (# packets was incrementing at about a 1hz rate). They were all invalid though.

Moving the LNB around slowly, I was able to improve this to where the SNR bounced around from -14 to -15 dB and the RSSI was -87. At that point a handful of packets came through (as valid). But after swinging a bit left and right, and up and down from this spot, this was the best I could get.

I would never get more than a handful (maybe 5) valid packets in a row. But the packet counter would go up every time I did, and the Error rate and Valid Packets % would go up.

The best response seemed to be around 12.089425, but even there, it would rarely go into Lock and I would only get maybe 10 valid packets at a time, the error rate was quite high.

Even after going back to 12.089425, it would still show -40 SNR and -160 RSSI most of the time, and the Valid Packet counter was nonlinear (which is NOT how it was acting prior)

I also tried using the Autotune app, which seems like a great idea! However it didn’t do anything for me (ended with the “Scan done, nothing found” message). It only seems to have 10khz steps (Kenbarbi’s guide suggested 5khz, which is what I used when I did this manually). I selected 50 steps and it did 100 operations (I assume it goes 50 above and 50 below your current setpoint). I started it at 12.0894. I think the Tuner Status coming back as mostly bad (-160 RSSI, -40SNR) was making it impossible to tune anything. I also tried going a bit under 12.08495 but nothing much happened there, either.

So far, I haven’t had great luck (lack of skill on my part?) with this device. The non-fortuitous reduction in power is probably not helping things but I did what I could about that (bought two units

Thank you for any advice you may have.

You actually can improve the SNR considerably by adding a cone!

The fact that you have received some valid packets means that you are at the edge of reception and your kit functions as it should. It’s not possible to get a false positive on packets because we are the only geostationary satellite service which uses this type of modulation.

Definitely try some of the simple cone-ideas that can improve SNR by 3. That would put you at SNR 11, which is solid for the current radio settings.

Thanks Syed! The confirmation that the valid packet count (small as it is) is a guarantee that I’m on the right track is encouraging! I am going to give it another shot when I get some more time.

So well documented of what you have tried! And without any reflector cone or dish to help. I would do as Syed said. Make it easier on yourself in the beginning till you get 100% good packets. Call that your reference setup. Then experiment with different configurations if you wish. Going back to the reference setup if necessary. Good luck.

@n3rd
Thanks for the great report. As @Syed stated, you are right on the edge, and are working in the right direction. A cone could likely improve your SNR to acceptable, even very good numbers. Once you get that over -13, you will see a great change in your receive data. Keep up the good work!
Jerry

Just a quick question - - are you using the Bullseye LNB? What kind of frequency offset are you getting with your LNB? This is what a Bullseye does. Ken 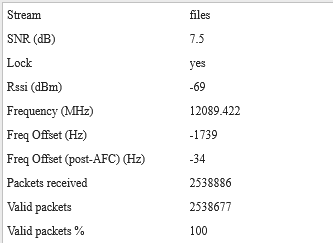 Thanks everyone, I guess I’ll look into making a wire cone for the LNB.

IIRC, the Frequency Offset would jump around a lot, here’s a single static screen grab from during the experimentation 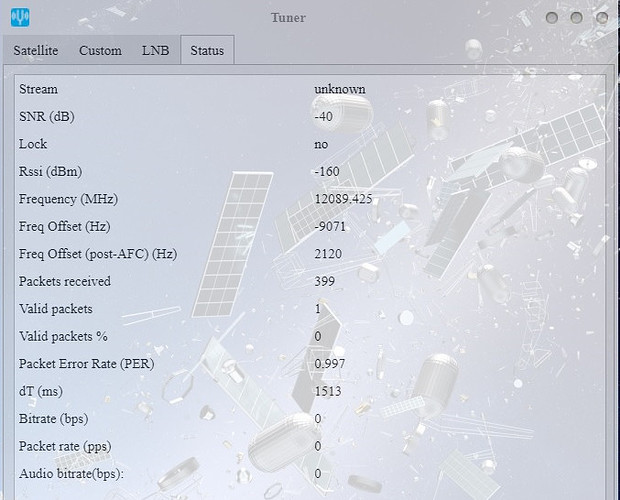 The -40/-160 values are not real values. Those are just default numbers reported by the chip when there are no packets.

SNR -25 is the lowest I’ve seen for reception of an actual packet. And that’s not possible with the current radio settings (spreading factor and coding rate).

The Bullseye is the bottom LNB with the red cap and black body. Ken